SVIMS is a member of The North American Mycological Association (NAMA), the collective that unites the mycological societies on this continent.  Four to six times a year NAMA publishes its newsletter, the Mycophile, and makes it available to members of all supporting clubs.  The April-June issue is available.  To read it, click or tap on the picture of the cover. 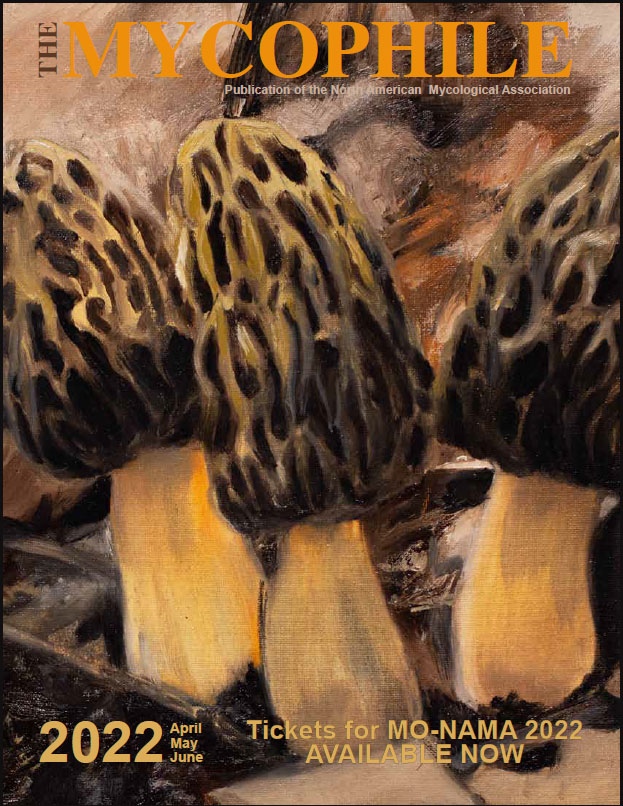 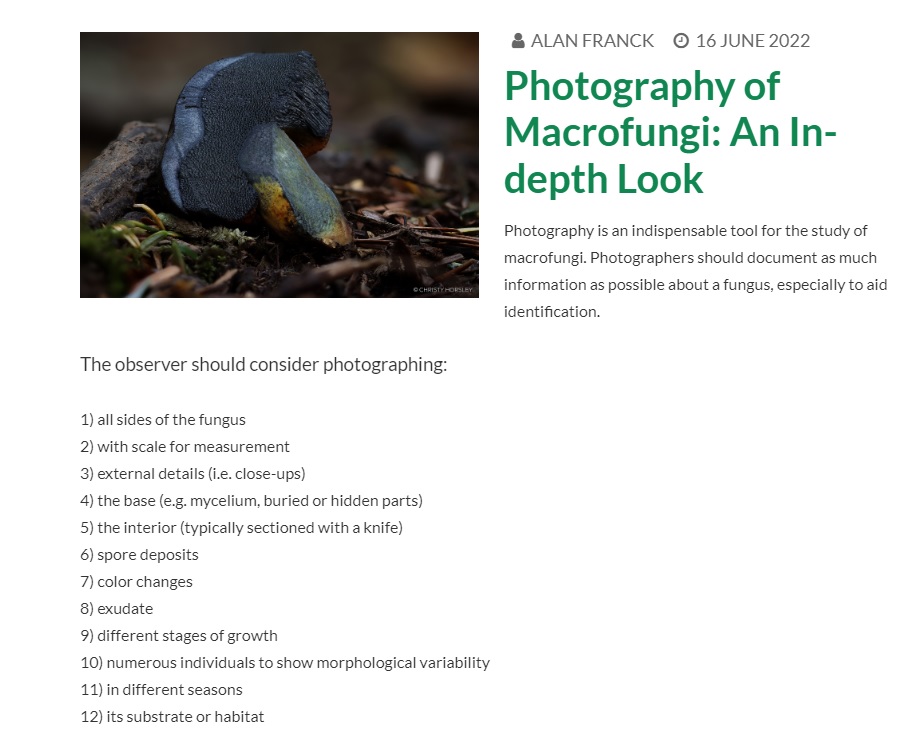 Alan Franck has some good suggestions for what should be photographed if you want to have help with mushroom identification. Posted on the FUNDIS blog.

Children’s educator and songwriter Rosie Emery recently released a song, Funky Fungi. She was inspired by some recent books on mycorrhizal fungi. 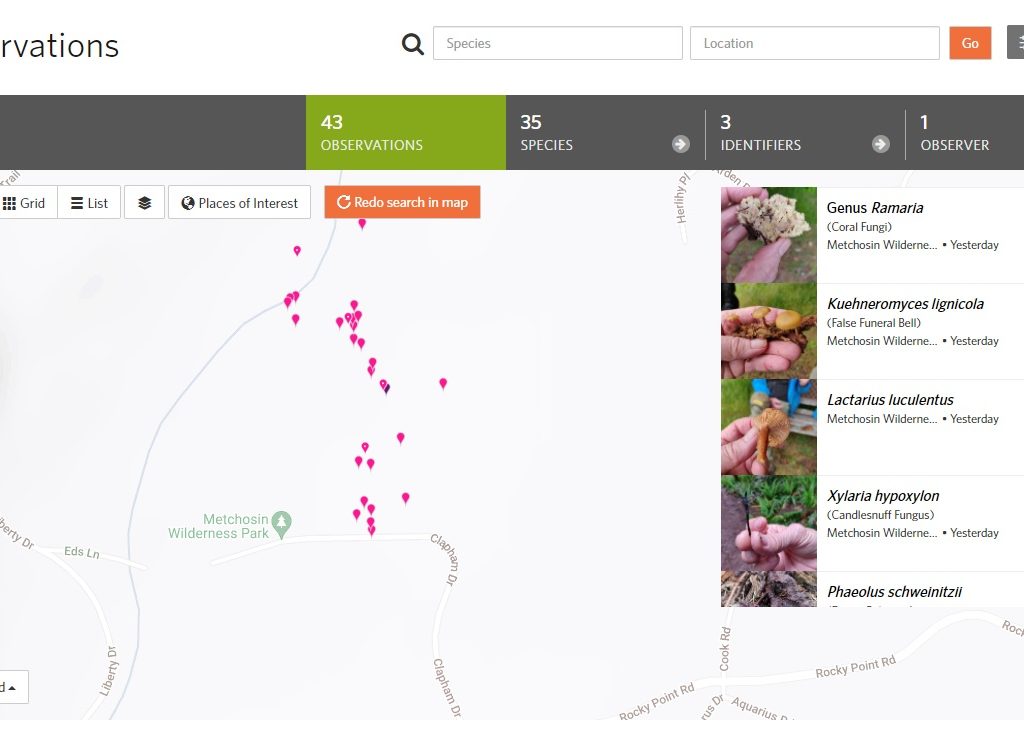 Two dozen members of SVIMS met on Saturday, May 21, 2022, at Metchosin’s Blinkhorn Lake Park to search for spring fungi.

The searchers found 30 species, breaking the spring 2022 record (April 23) for the number of mushroom species found in a foray. The observations can be viewed on iNaturalist.

Steve Strybosch and Melanie Hesz coordinated the registration and sign-in. Kem Luther and Andy MacKinnon came along to help with identification. Elora Adamson assisted with the species photography and recording.

Several of the finds were spring cups:

(1) The asco Eyelash Cup, Scutellenia scutellata, is not exactly rare but always a thrill to find.

(2) Another cup, the Brown Bowl Fungus, Tarzetta catinus, is more of a rare find. This was the first Metchosin sighting of this asco.

(3) The Hairy Fairy Cup, Lachnum virgineum, showed up on some wood impregnated with blue Chlorociboria mycelium.

In addition, forayers also found Alpova concolor and Inocybe stellatospora. The inocybe has not been reported from BC on iNaturalist before, but there are several observations on Mushroom Observer, including ones by Adolf and Oluna and by Fred Rhoades (a Washington friend of SVIMS). Whether these two new finds will hold up depends on what identifiers say about them in coming weeks. 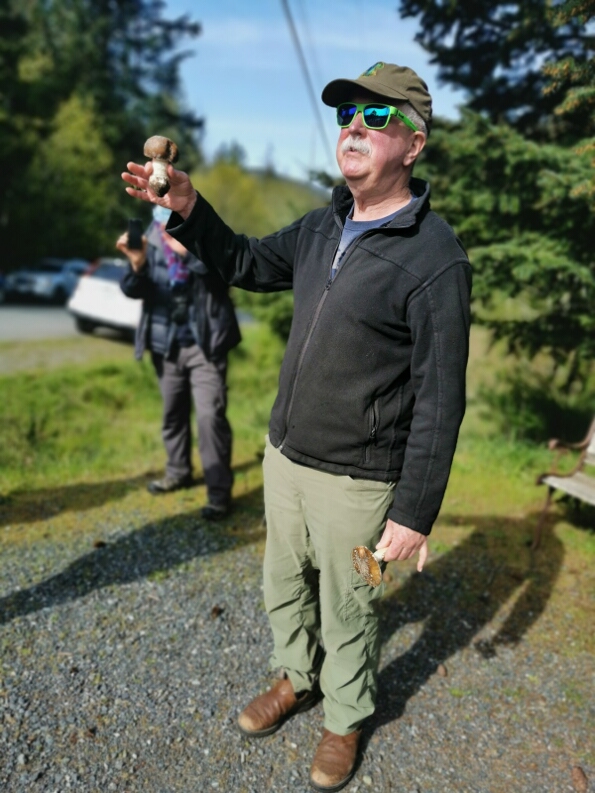 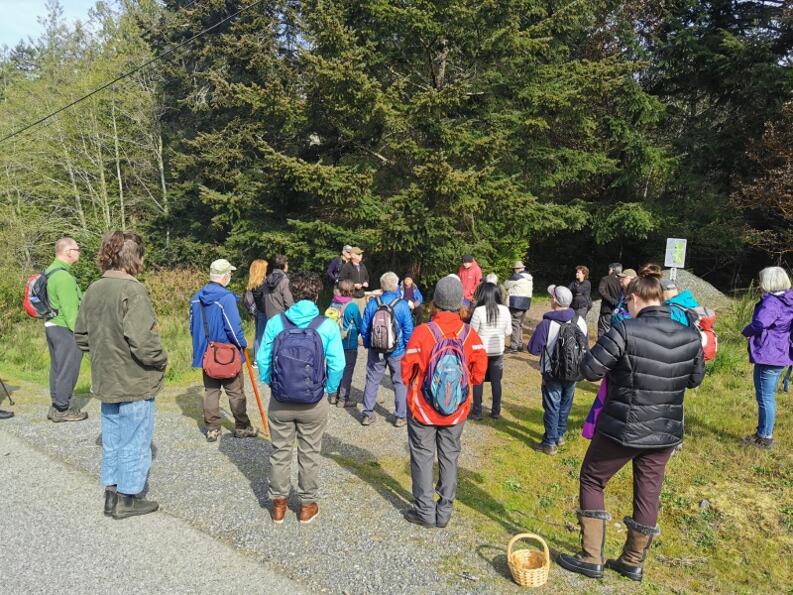 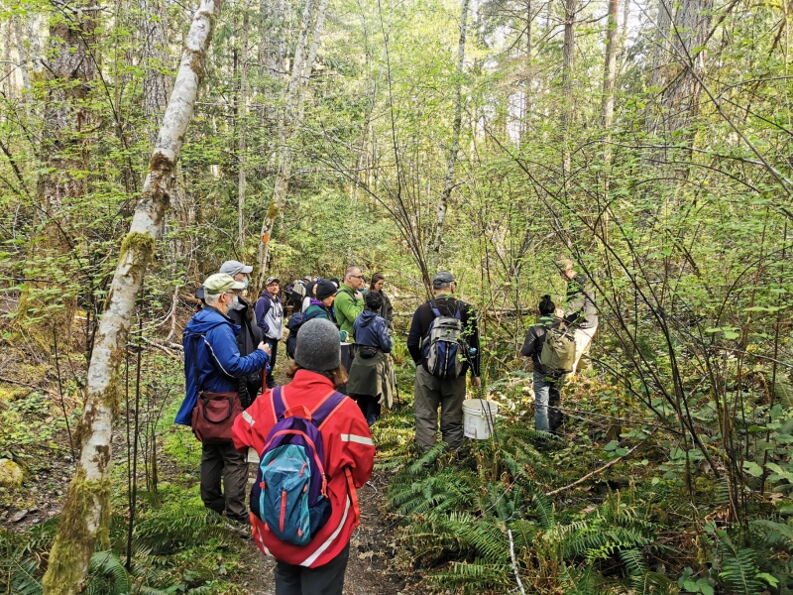 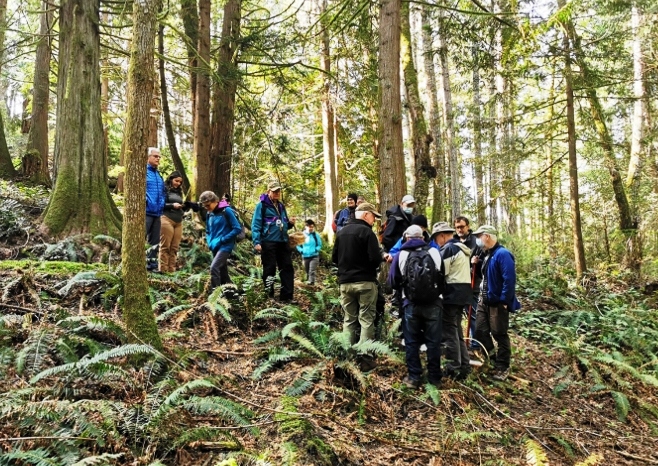 On Saturday, April 16, SVIMS had its first local, non-lichenized mushroom foray in more than two years. About two dozen people showed up at the back entrance to Royal Roads and spent two hours looking high and low for spring mushrooms. Steve Strybosch, Mel Hesz, and David Walde coordinated the registration and sign-in (and, we are happy to report, lost no one in the deep woods of suburban Victoria). Kem Luther and Andy MacKinnon came along to help with identification and Elora Adamson helped with the species photography and recording.

Fifteen mushrooms were found and IDed. You can see the list and pictures on iNaturalist.  (The exact IDs of mushrooms posted on group sites such as Mushroom Observer and iNaturalist may change after posting as experts weigh in). One of the highlights of the foray was finding the beautiful snowbank orange peel cup fungus, Caloscypha fulgens. With a little encouragement from Andy, this ascomycete put on a dazzling display of spore dispersal. See the short clip in this post, courtesy of Mike Gold.