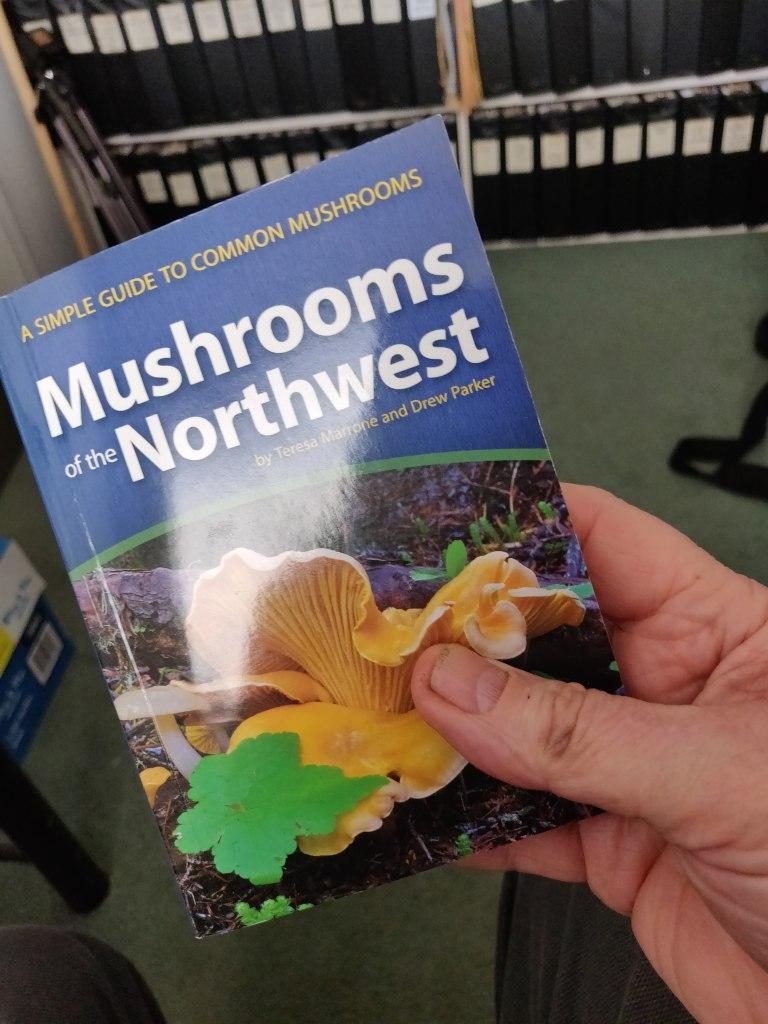 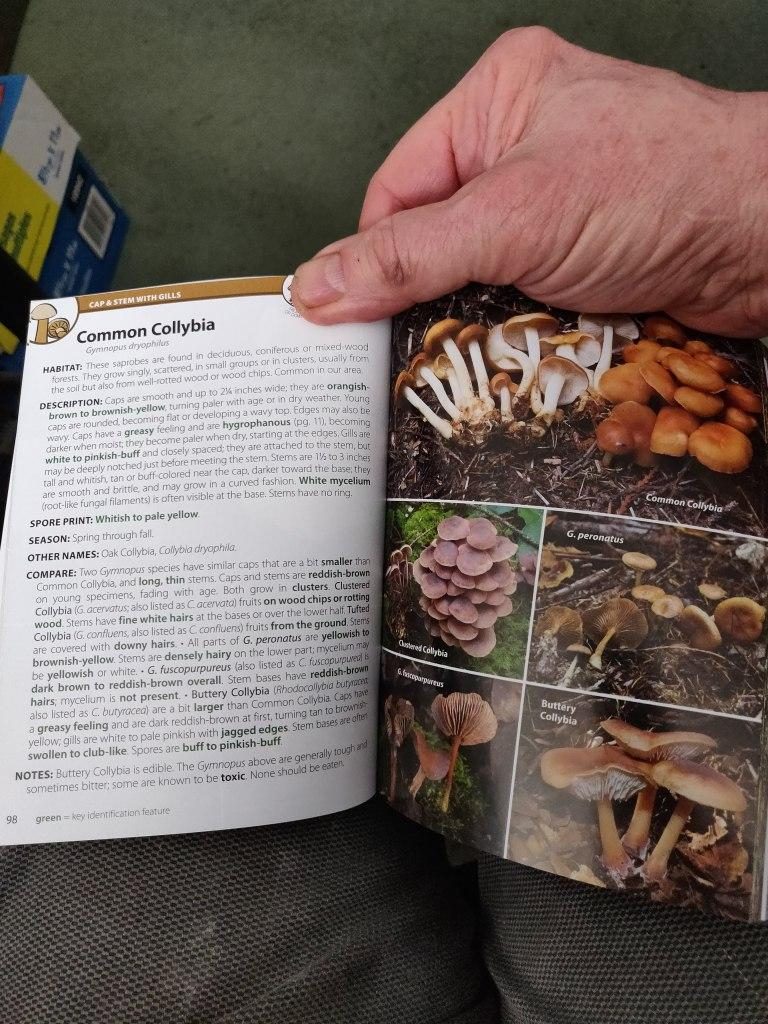 I’d like to call your attention to a new mushroom guide for our general area. It was just published this spring. The book is by Drew Parker, a member of the Pacific Northwest Key Council, a person several of us know. The title is Mushrooms of the Pacific Northwest.
Drew did the book with Theresa Marrone, an author of many field guides, and the book is modelled after a book that Marrone did called Mushrooms of the Upper Midwest. The books are published by a small publisher in Minnesota (Adventure Publications) that specializes in field guides.
The book is quite small, barely 6X4 inches, and about 300 pages long. It has about 140 main entries. Since it is a limited-coverage pocket guide, it should be compared to David Arora’s All that the Rain Promises, a book with similar size, purpose, coverage, and price (each is about $22 CN on Amazon).
Some observations:
(1) Though there are only about 140 main entries, Marrone and Parker’s book mentions in passing at least 500 mushrooms. Compare this to Arora’s 220 entries that mention very few other mushrooms. Though almost all of the entries in Marrone and Parker’s book start with a specific mushroom at the head, some of the entries are groups (Elfin Saddles, Funnel Caps, LBMs, Purplish Cortinarius, for example) that are opportunities to mention briefly some of the species in the group. Mushrooms that aren’t main entries get about 3-5 lines of text each.
(2) Most entries have a page of text on the left and pictures on the right. Those that aren’t in a two-page spread have text on the bottom 2/3 and pics on the top 1/3. A full right-hand page picture is almost always divided into 3-4 individual photographs. The individual images, almost all of which have been taken by Drew, are high quality pictures. Most of them show mushrooms posed to display diagnostic features. The images, of course, are by necessity small, given the size of the book and the number of pictures on a page. On the whole, though, they are not much smaller than the pictures in All that the Rain Promises.
(3) The mushroom descriptions have separate paragraphs for Compare, Notes, Spore Print, Seasons, Other Names, Habitat, and Description (though not all of these appear in every main entry). The description paragraphs uses a running text with a green-coloured font to highlight the mushroom’s main features. Compare this to David Arora’s point form summaries of main features.
(4) There is a 16-page intro to mushrooms in Marrone and Parker’s book, about the same as David Arora’s book. The intro to Marrone and Parker makes effective use of small pictures to show the various forms taken by morphological features (how gills attach, for example). There is nothing in the book, however, that is comparable to the fascinating box essays in David Arora’s book
(5) Marrone and Parker’s book has a glossary with about a hundred items. David Arora’s book has no glossary. Both have indexes of common and scientific names, but Marrone and Parker has them all in a single alphabetic sequence.
(6) About 20 mushrooms in Marrone and Parker’s book are broken out of their groups and put at the beginning as “Top Edibles” and “Top Toxics.” The rest are in 10 groups (cap and stem with gills, cap and stem with pores, atypical caps, shelf with pores, shelf with gills, other shelfs, spherical, cup-shaped, coral and club, miscellaneous). Except for a 2-page spread at the beginning with miniature pics and symbols to help the reader get to the right group, there is no systematic identification guidance, such as keys or charts, nor is there an intro at the head of each group explaining what the group is about. This is, like David Arora’s book, a flip-through-the-pics-and-find-something-similar kind of guide.
(7) Common names are included. In fact, the common names are the main headings and the scientific names are in small print under them. The scientific names reflect the latest taxonomical changes.
(8) Marrone and Parker’s book has good coverage of mushrooms in our area of BC. In fact, in a quick flip through the major entries, I saw only a couple that weren’t all that relevant to our area of BC. The coverage of our specific BC mushrooms is, I think, better than David Arora’s book, which focuses, of course, on California mushrooms. However, some of the mushrooms in Marrone and Parker are relatively rare in our locale. (To be fair, though, hardly any guide book will be as good for a specific region as one targeted to just that region.)
I’ll bring a copy to the next SVIMS meeting for those who want to look at it. 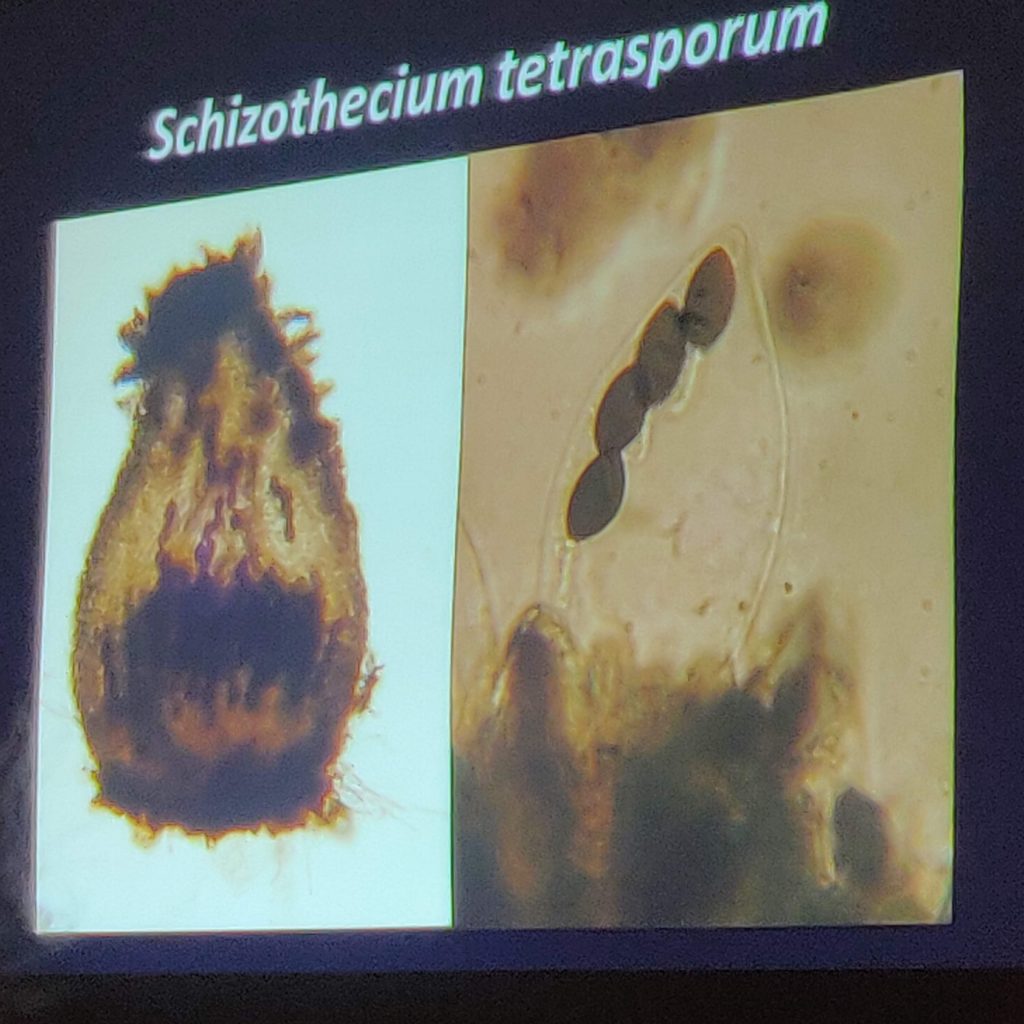 At the SVIMS April meeting a full house gathered to hear one of the founders of SVIMS, Adolf Ceska, hold forth on the glories of dung mushrooms.

His stellar photographs and Oluna’s skilled drawings opened a door on dung that SVIMS members, either accidentally or intentionally (phew!), had closed. 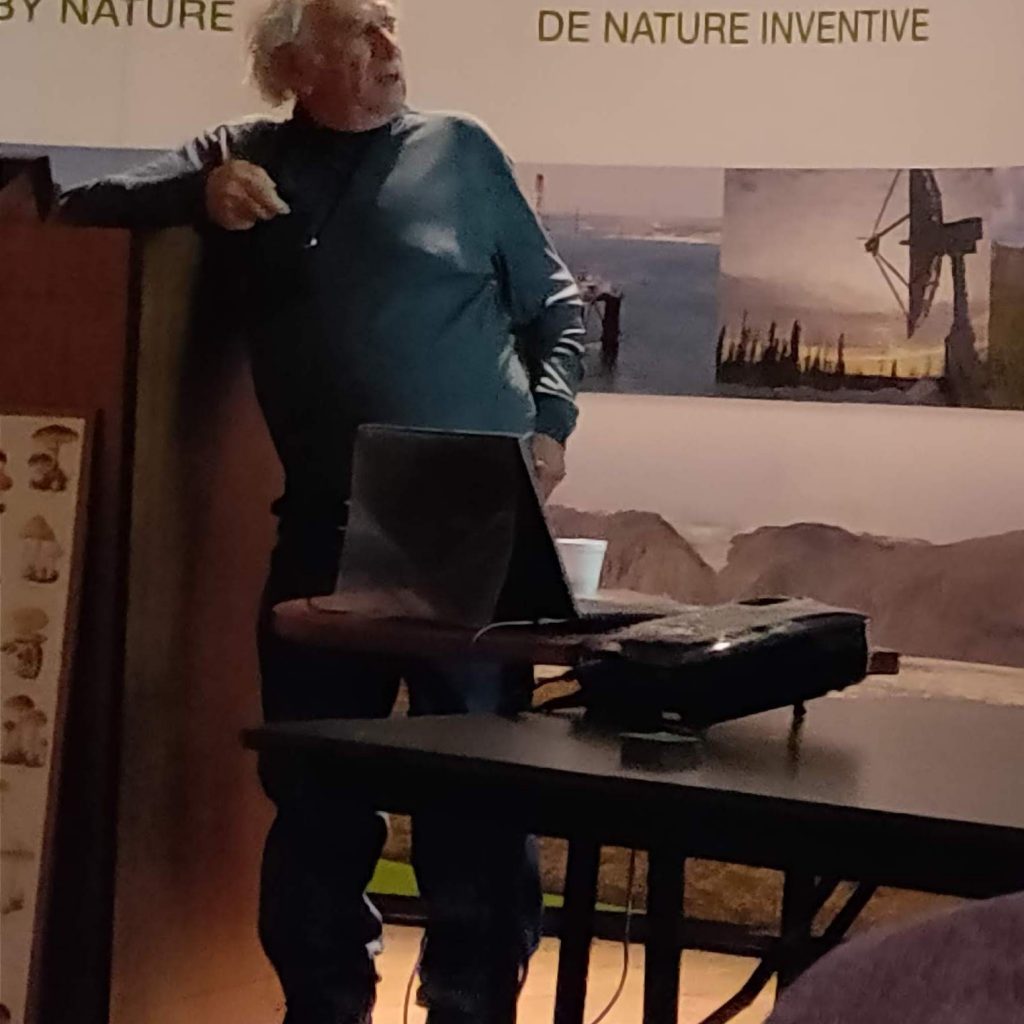 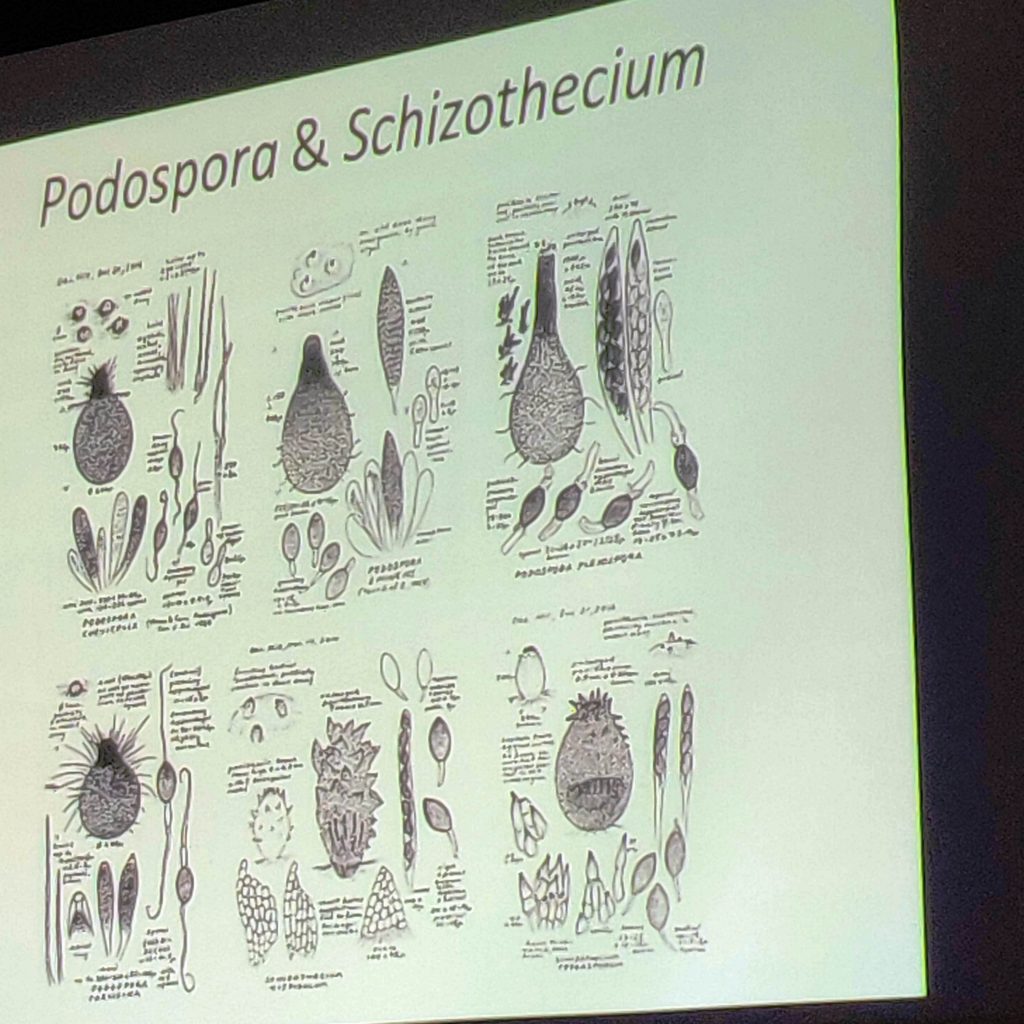 September through May (except January) at 7:00 pm (Visitors Welcome)