SVIMS held its annual mushroom show November 6, 2022 at St. Luke’s Anglican Church. Over 25 volunteers supported 650 participants where about 140 mushroom species were observed. Despite the lack of rain, it was a beautiful day with an amazing show of mushrooms and enthusiasm.

Our crew of expert identifiers included Shannon Berch and the students from her training course. Everyone involved did a great job of tabling and labeling the mushrooms brought in from volunteers and the public. Unusual species include a vermilion polypore (Pycnoporus cinnabarinus, see below) and a stalked puffball. 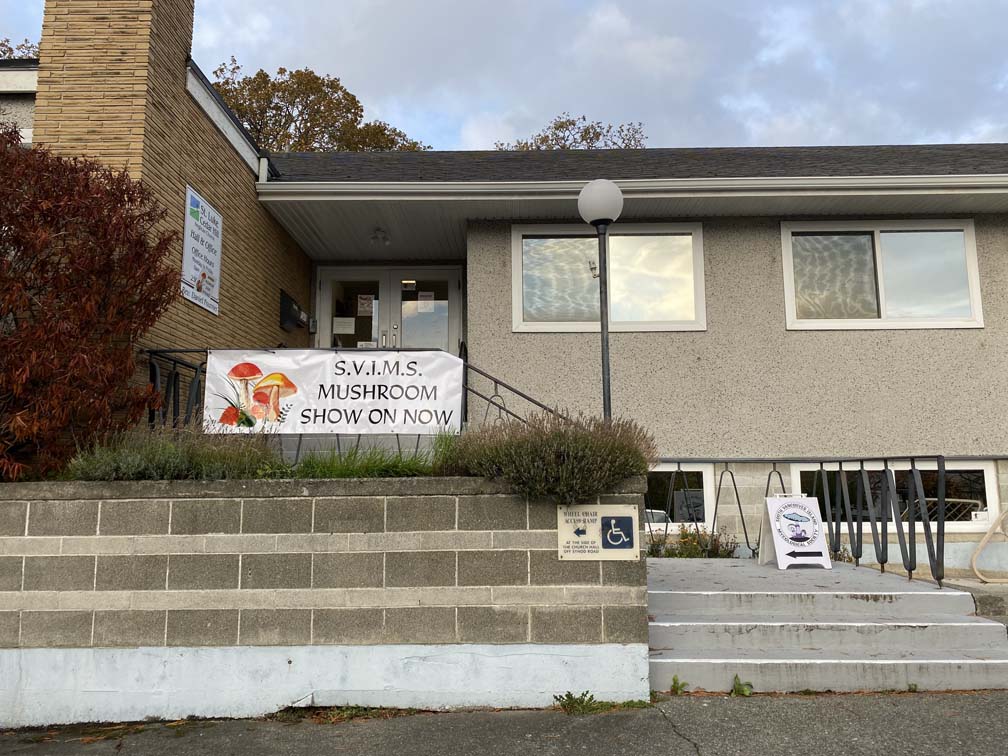 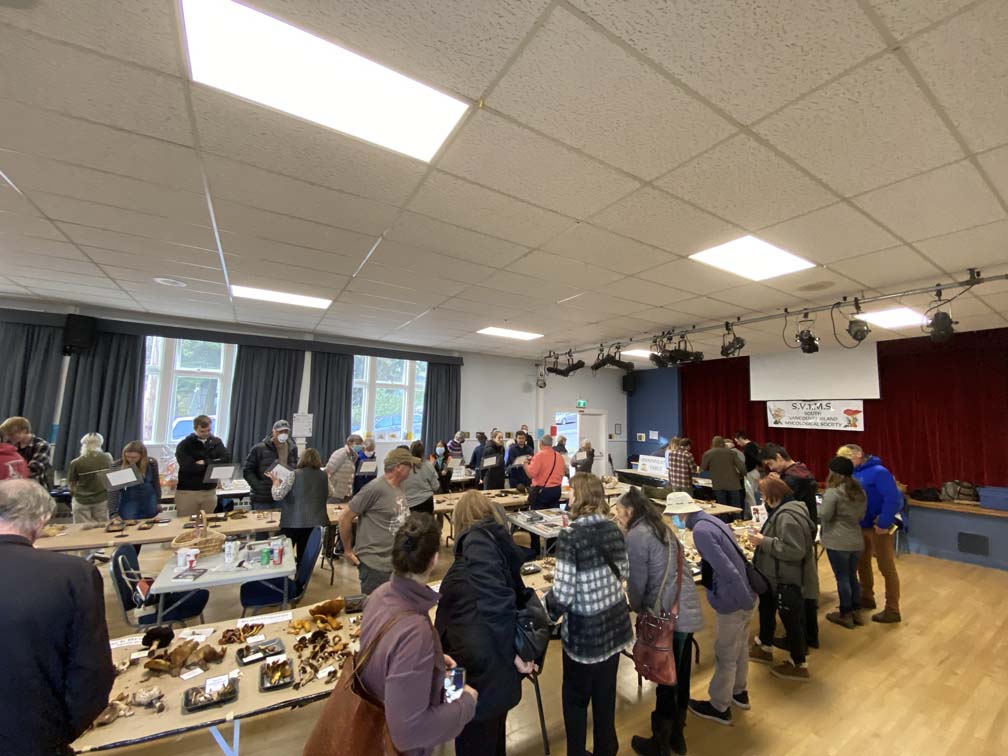 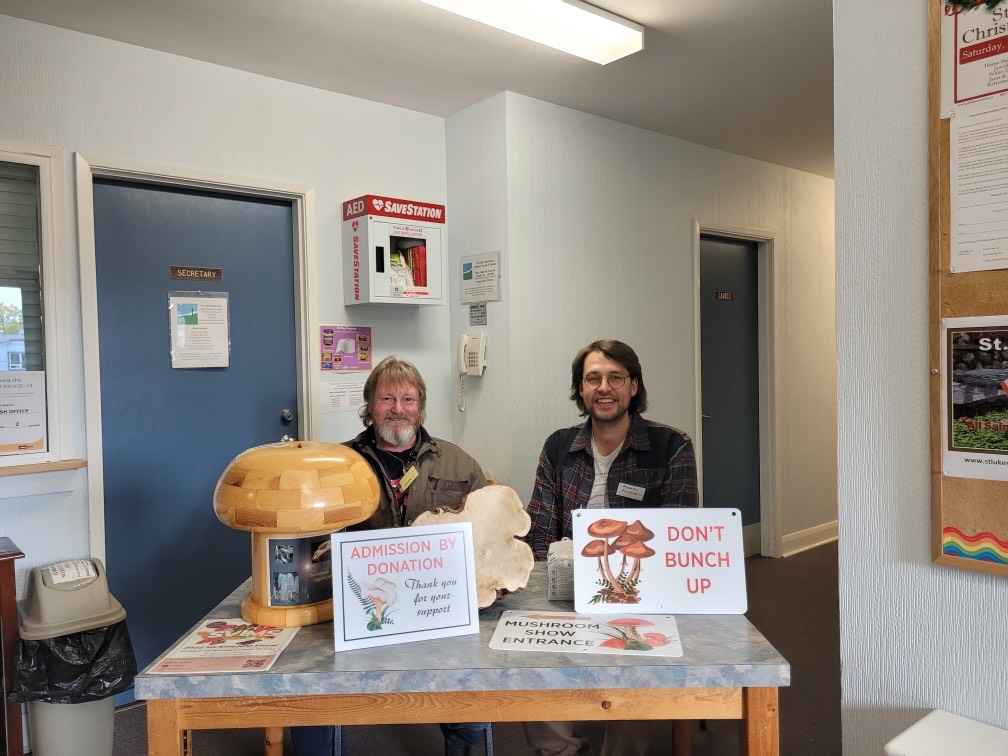 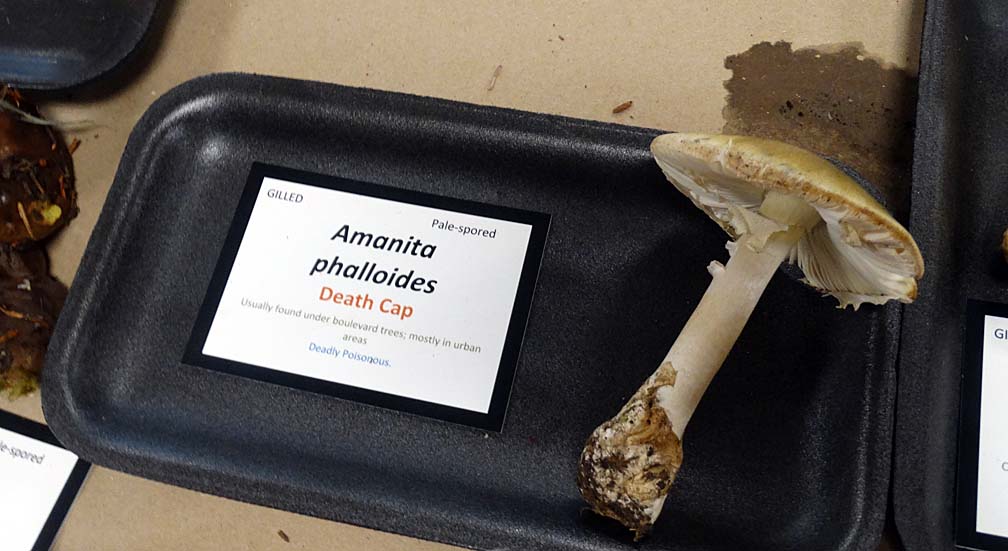 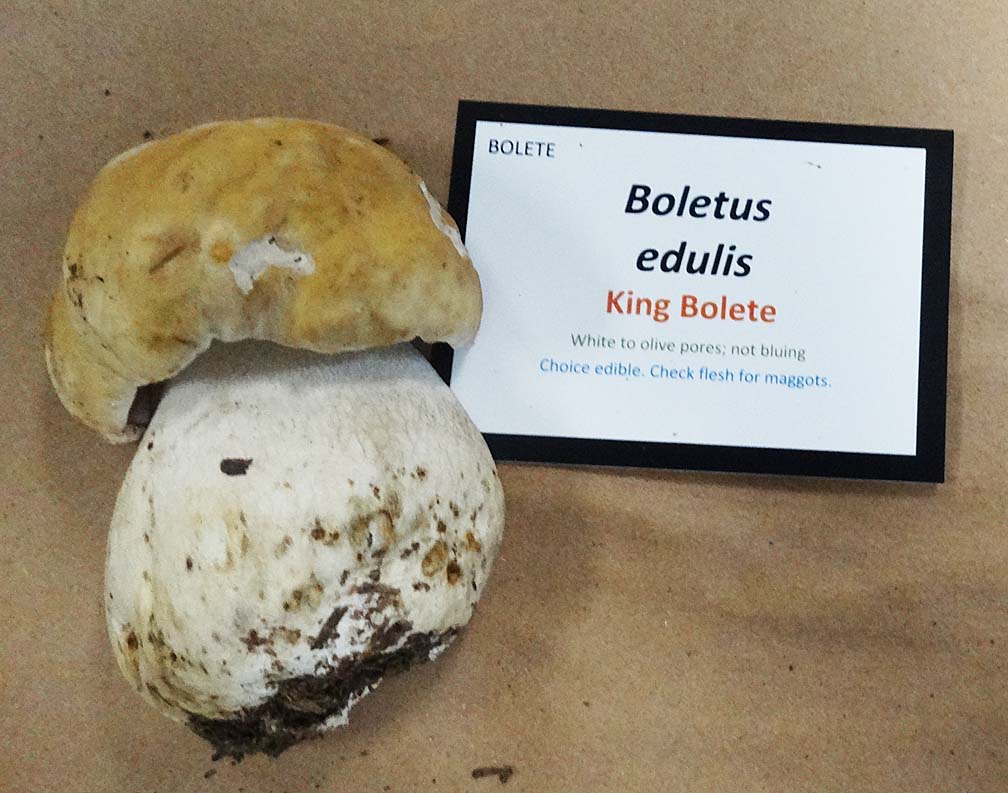 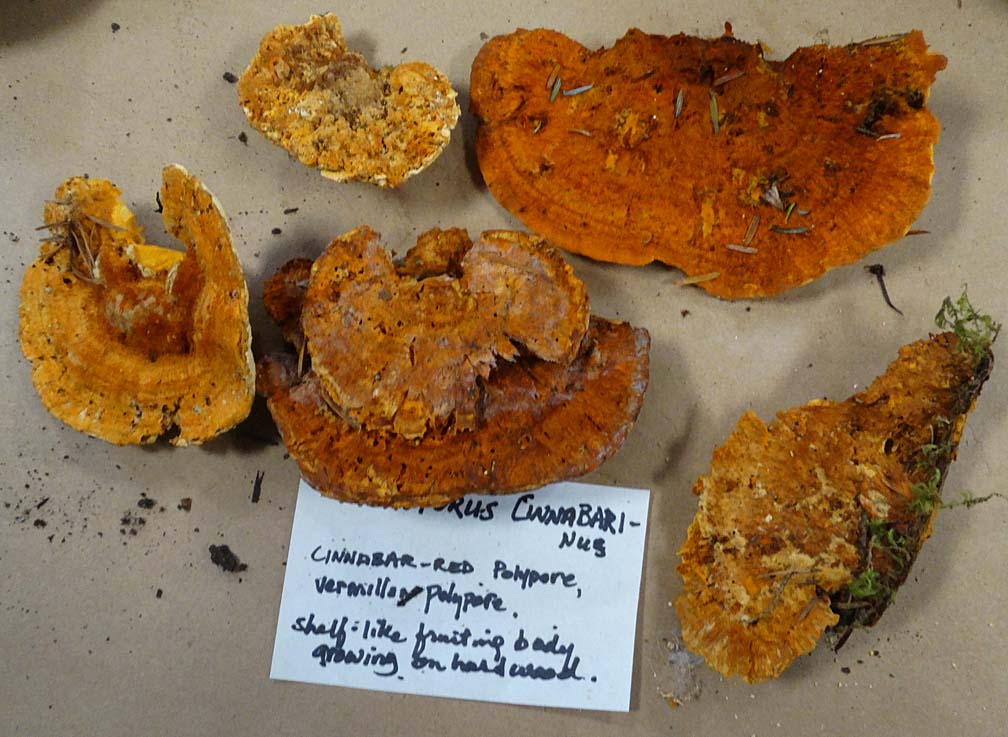 Thus will be a Zoom meeting only. Due to the weather, the in-person part is canceled. A Zoom link will be sent to members by email a day or so before the meeting. We are looking forward to hearing Alan Rockefeller talk about bioluminescent and fluorescent fungi (see poster below). Our Facebook community will join us via Zoom. 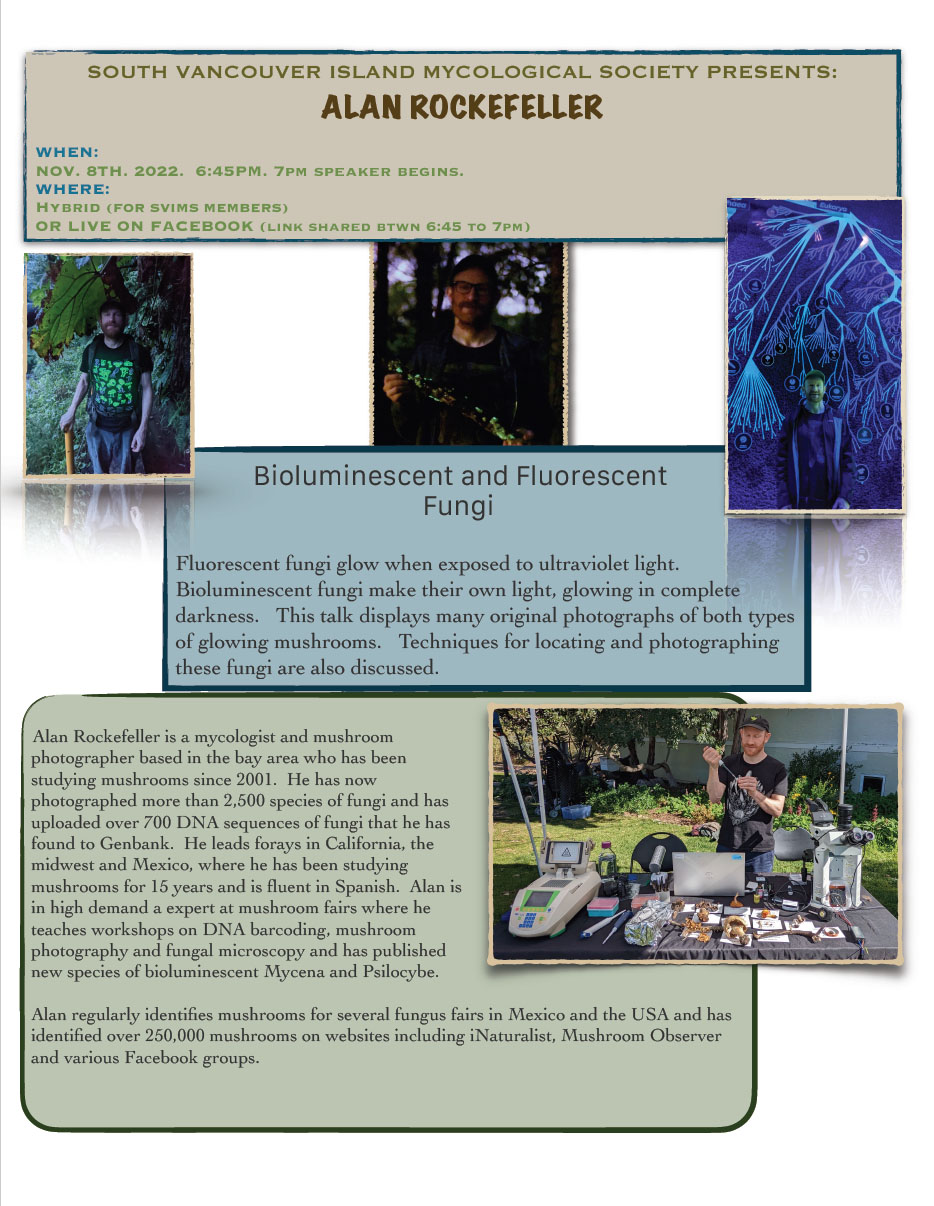 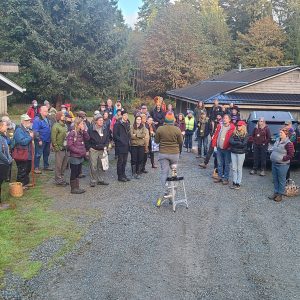 SVIMS held its 2022 Cowichan Foray last weekend at the Cowichan Lake Education Centre.  During the outing, about 60 people—counting both the full-foray attendees and the Saturday daytrippers—sought out fall mushrooms. Teams were sent to Gordon Bay Campground, the Forestry Centre old growth, and the grounds around the Cowichan Lake Education Centre. The dry year made the usually-plentiful mushrooms hard to find.

The weekend–ably organized by Kurt, Mel, Steve, Gillian, David, and others–began with a supper at the Cow Restaurant in Lake Cowichan.

Besides enjoying the evening entertainment sessions and chowing down on the great food at the Centre, foray participant took several guided walks to view and collect samples of the area mushrooms.

Shannon Berch and the students from her training course did a great job of tabling and labeling the mushrooms brought in from the forays and identifying them. Mitch Milgram of Salmon Arm, who teaches mycology at Okanagan College, and Martin Osis, a member of the Alberta Mycological Society, joined SVIMS experts to help with further identification.

The results of the collecting have been posted on iNaturalist. In all, SVIMS members tallied almost 100 different species of mushrooms. This was only about 15 fewer species than the club found last year, which was surprising. Mushrooms this year may have lacked quantity, but they retained some of their variety. Leaders judged five specimens to be voucher-worthy (The vouchered specimens can be viewed here.)

Some fun finds below. But first, some pictures from the events.

SVIMS members crank up the music at the entertainment evenings. 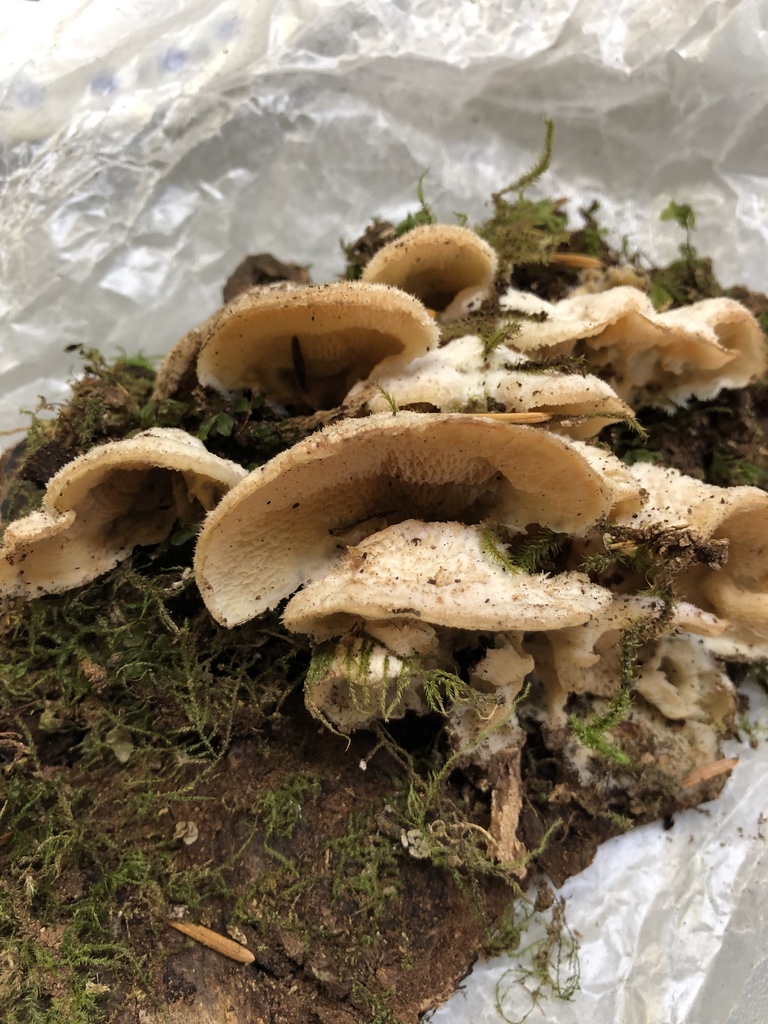 Participants found several good stands of Phlebia tremellosa. (view one of the several iNaturalist observation here). This fungus pushes out pink/white shelves at the top edge of the vertically-oriented crusts. 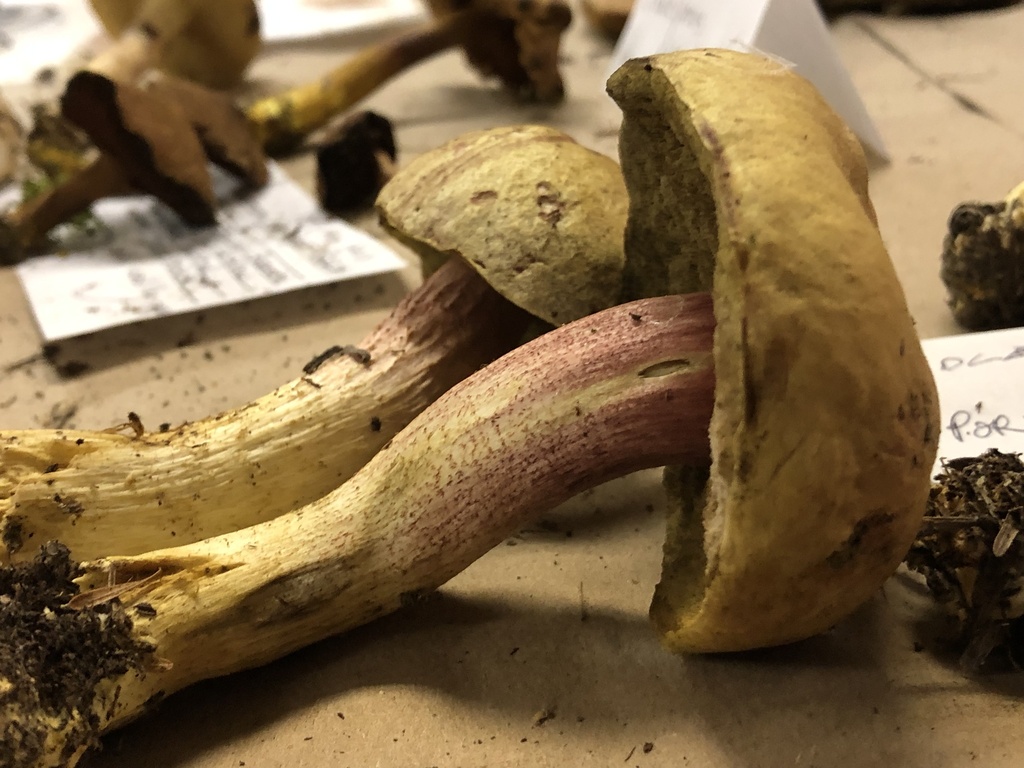 A few of the participants travelled to Cowichan Lake by way of Port Renfrew. Just outside of Port Renfrew they found an area that was not as dry as most other areas of Southern Vancouver Island. They collected mushrooms there and brought them to the Cowichan foray. Among their finds were some stately boletes–Smith’s Boletes (Boletus smithii), which have stems with a red colouration on the top. 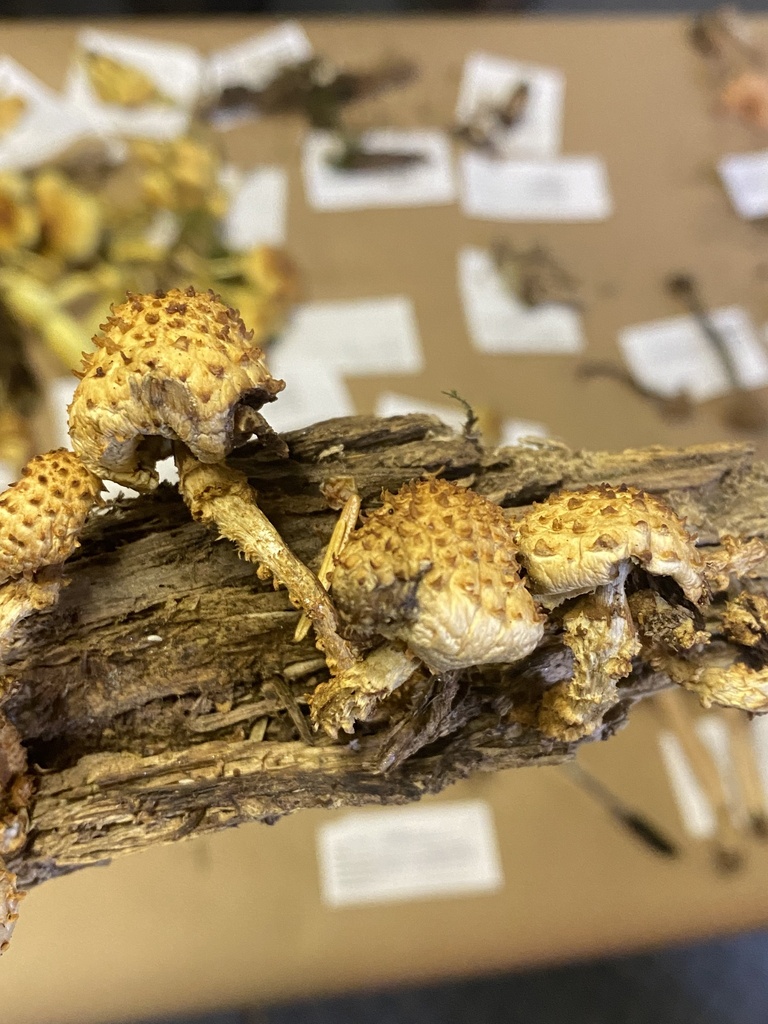 Because of the dry season, decomposers were much more abundant than mycorrhizal mushrooms. One of the groups surveying the lake shore near the Cowichan Lake Education Centre turned up an impressive array of Pholiota squarrosoides caps. 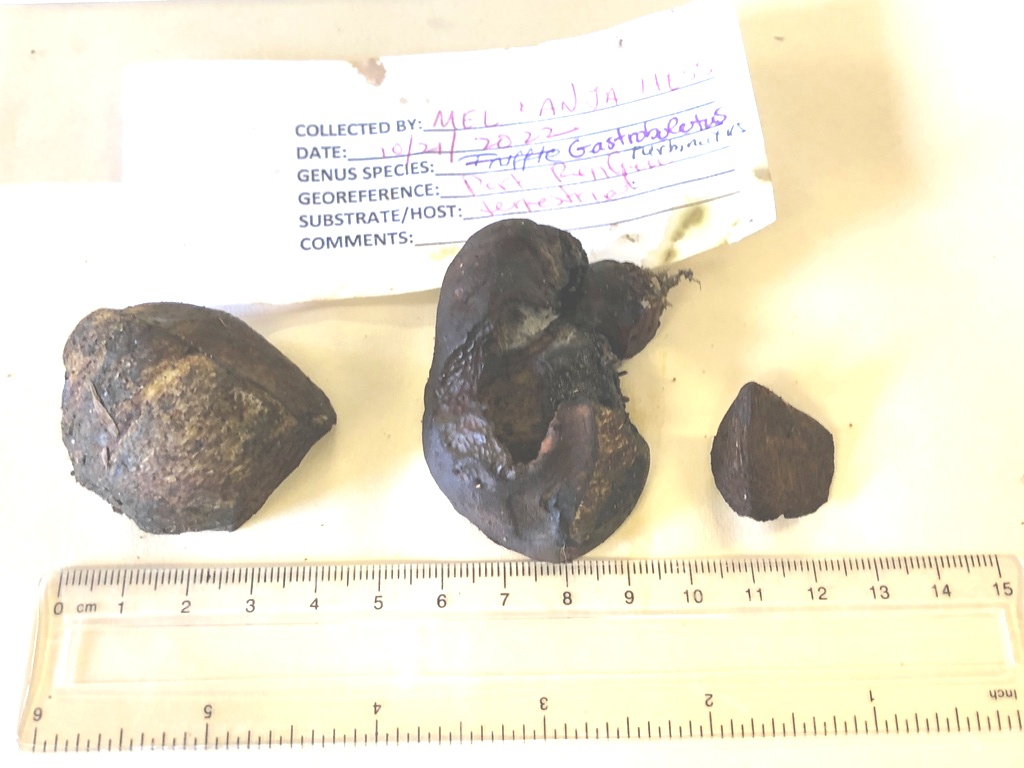 The Port Renfrew crew also found an unusual “truffle.” Several groups of gilled and pored mushrooms include gastroid species with gills that do not open up. Sometimes these gastroid caps remain in the ground or just on the surface of the ground. The group found a Gastroboletus turbinatus cap. 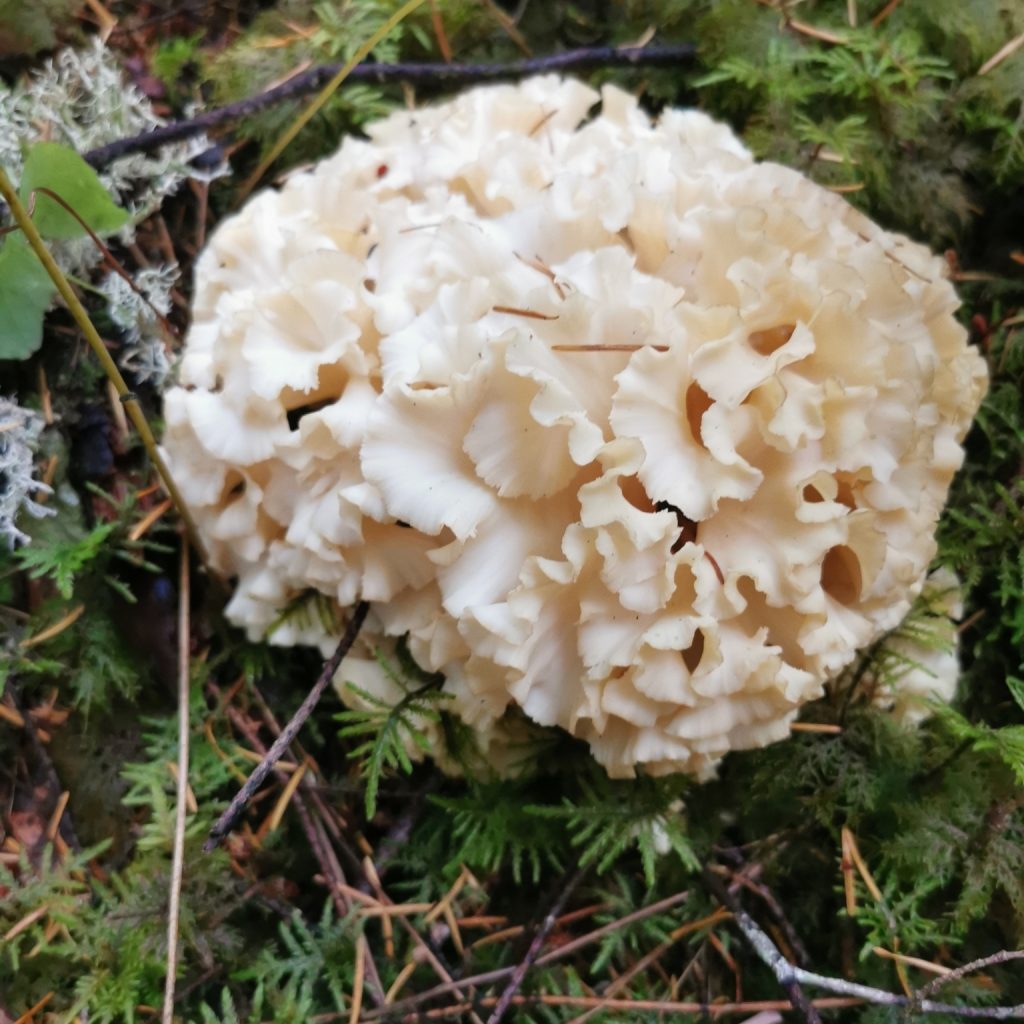 Reserve Sunday November 6 on your calendar for this year’s mushroom show (see first poster below).

And reserve Tuesday November 8 for the SVIMS meeting with a presentation by Alan Rockefeller  (see second poster below). 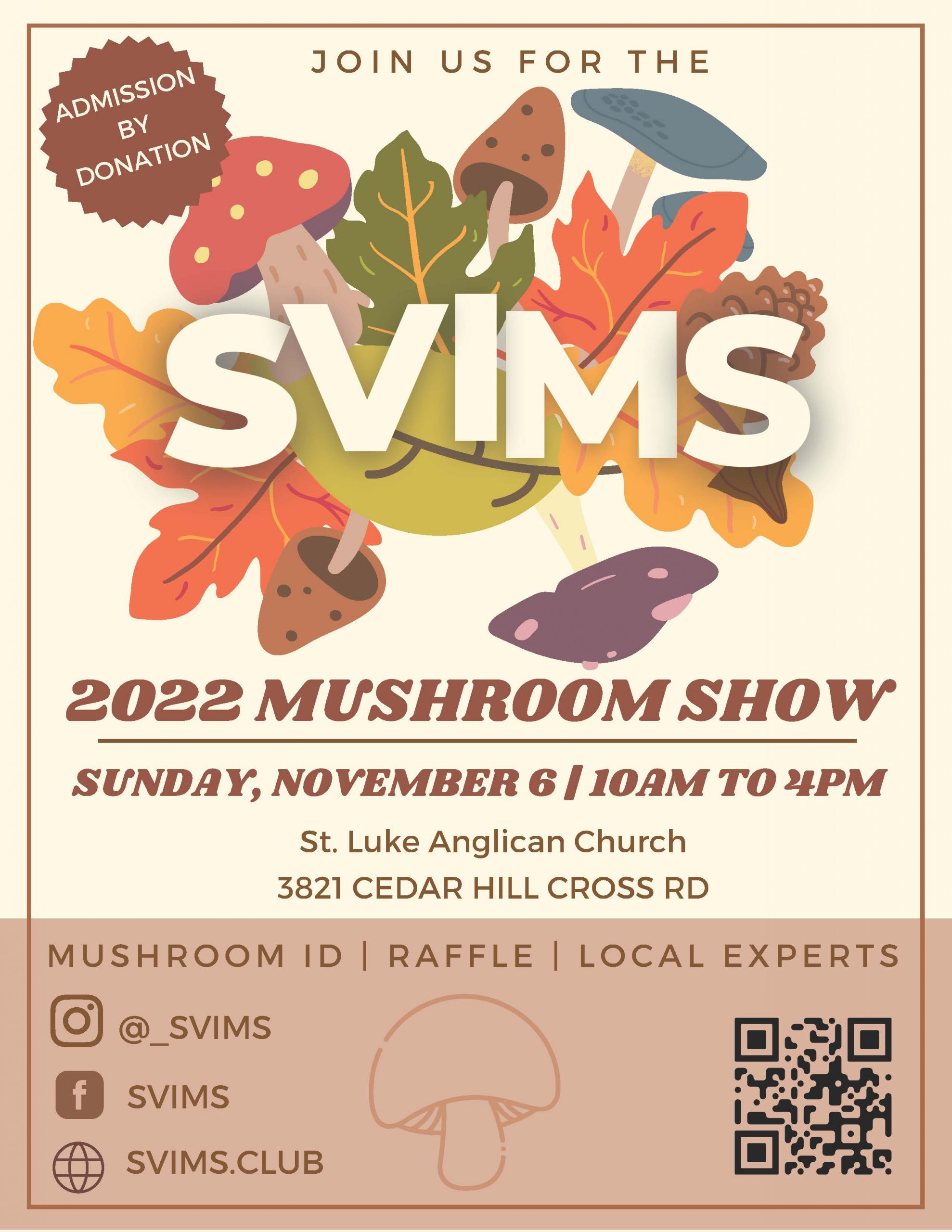 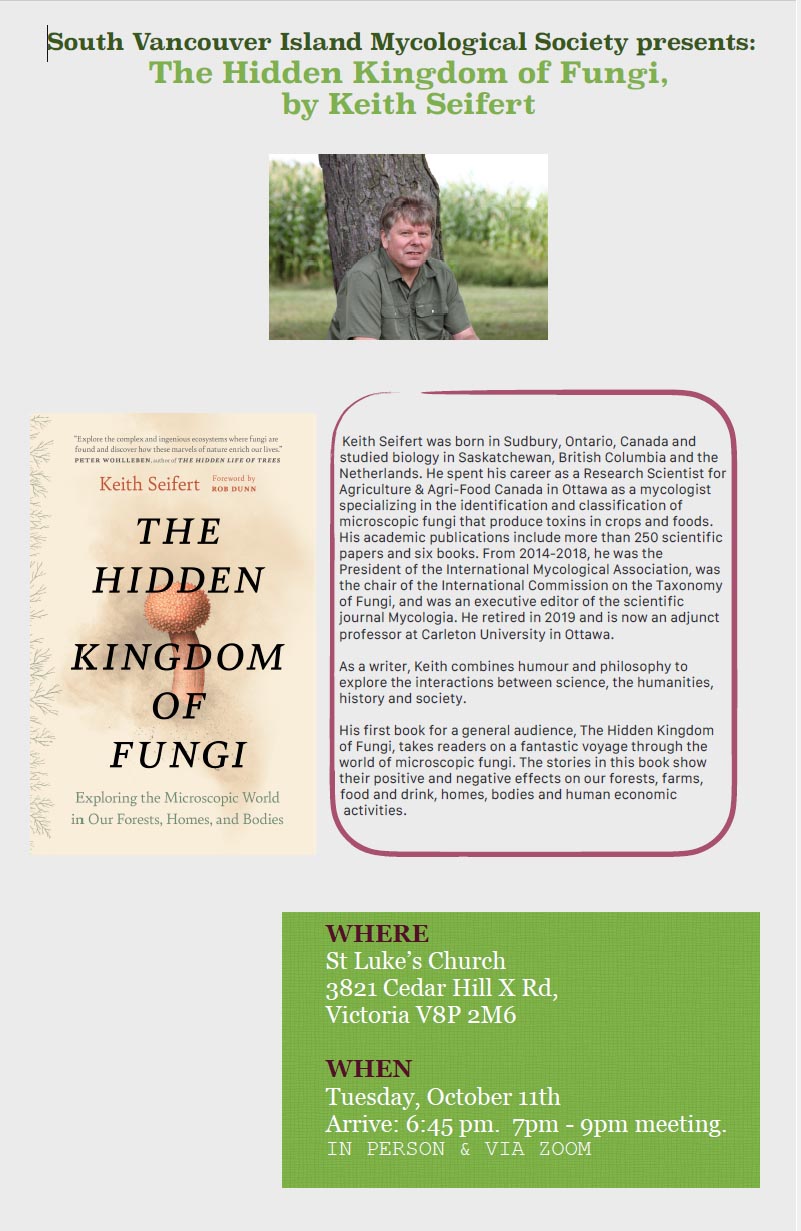 The dry autumn season continues in the Greater Victoria area. But the mushrooms are coming. In our area, it is not unusual for the fall mushrooms to wait until after the Thanksgiving holiday to put in an appearance.

There are a large lineup of mushroom events over the next five weeks. SVIMS has its Cowichan Foray coming up on Oct 21-23. Some of you may be interested to know that the day that our Cowichan Foray (sold out) ends, on Sunday, October 23, is the annual Mid-Island Mushroom Festival in Coombs. Some SVIMS members might wish to extend the weekend there.

Just a reminder–the best list of mushroom events for southwestern BC is the Forum at the UBC Botanical Garden. Andy MacKinnon and I keep a smaller list of events that he and/or I are involved in on the Mushrooms of BC book web site. 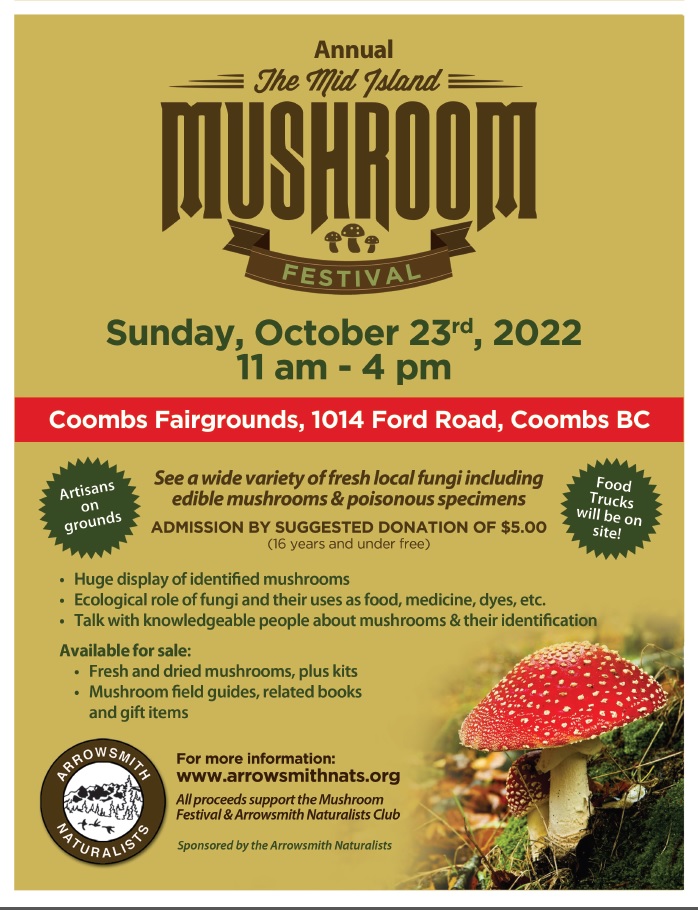